Shannon Messenger has a dark side...Shannon Messenger is evil.
Okay, I just had to say that before anything﻿. Because, it is so true and I never knew. Last night was the most soul crushing, gut wrenching night of my life. Well, that's a bit dramatic, but pretty accurate.;)
It was the most incredibly terrible, most wonderful night I have experienced.
Lem'me start at the beginning.
Two days ago, I went to the Neverseen launch party and it was amazing! I got the book earlier then the release date and I finished it in one day and night. It was amazing. I got to just hunker down in my room and HERMIT. I was in Keeper heaven. But then I got to the end of the book...and as pages ran out I was shouting NO! and crying- I knew it! and just plain dying.
That book....has left me at THE WORST CLIFF HANGER I HAVE EVER KNOWN.
Worse than Sherlock, worse than A-N-Y-T-H-I-N-G.
And now I have to wait a year, when she practically left me with nothing but a boat-load of feels.
I could NOT move for five minutes after I finished the book. I was too stunned. I was too heartbroken. And I'm pretty sure I shed a few tears just because I was so much emotional turmoil.XD
But I have to wait a year.
*sigh*
A whole year. ugh.

Okay, well, I think it's time for me to talk about how AMAZING the Neverseen launch party was!
We walked into the Barnes and Noble that was hosting it and I saw this as soon as I walked into the store-- 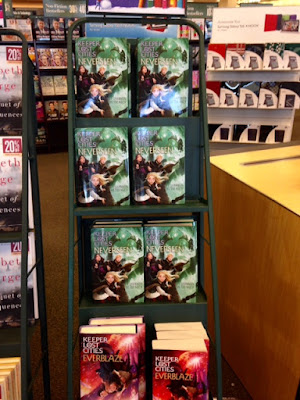 I was so excited and we immediately grabbed a book, then two sketchbooks (YES! I FINALLY GOT MY SKETCHBOOK!) and paid!:) I got a bracelet for the event and since we were there so early, we went and got something to eat then rushed back to the signing.:) 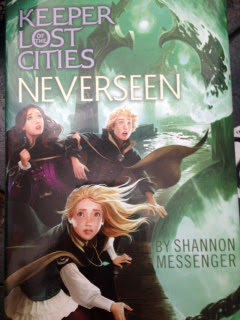 (This pic is kinda blurry, I don't know why...)
This is the glorious cover. It's been my phone's screen saver since, like, May.XD 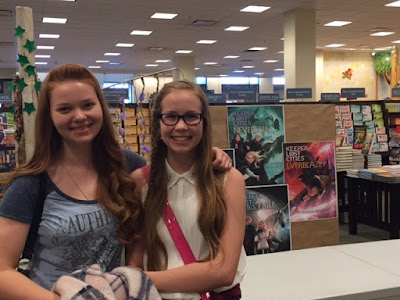 This is me and my sister up front by the table, before anyone really got there, but there was still a cool poster thing! Also, now I really want KEEPER posters!XD 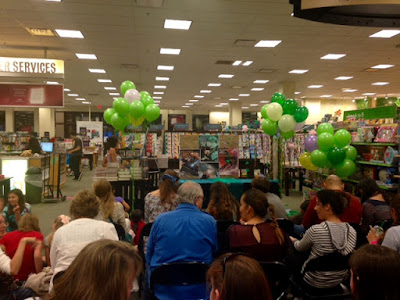 Then they got everything set up and I took a picture! It looked so cool and I loved the decorations! Everything was green! 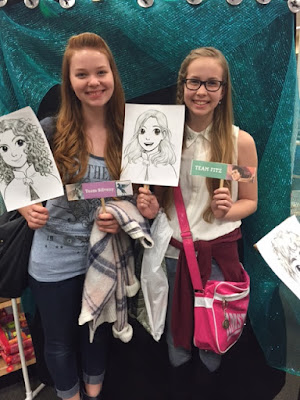 They had a sort of picture booth where you could take pictures of yourself holding up little poster things and "Team fill in blank space" sticks. My sister was confused and so she just grabbed a random person poster (Turns out it was Stina!XD) along with Team Silveny, and I grabbed a Sophie poster and a Team Fitz stick...Oh! Sophie and Fitz...together... I wonder what I meant by that?;P 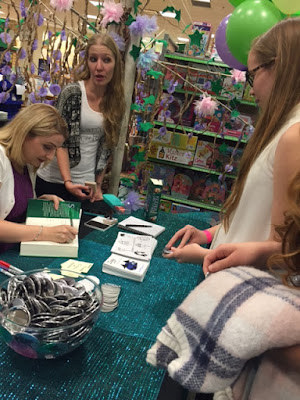 After some voting for which team was the best team (I think Team Sophie won, but Team Keefe was a close runner up) and a SUPER fun Q & A (I got so inspired to write!) with Shannon Messenger, we did the actual signing! This picture shows her signing my book and me and my sister grabbing the swag.:) 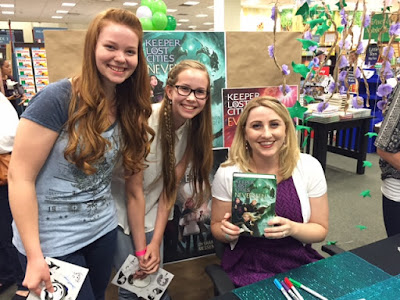 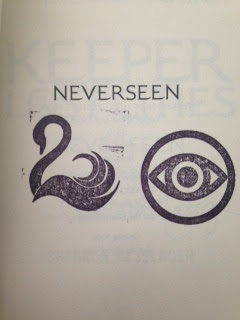 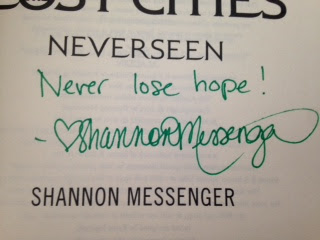 The nice little reminder and her signature!:D 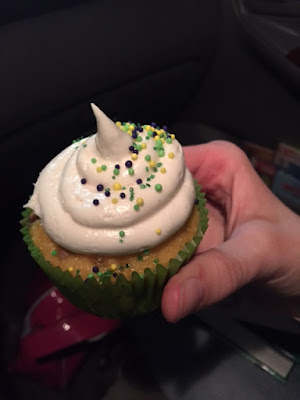 After we got our things, they gave us the MOST AMAZING MALLOWMELT CUPCAKES! They were delicious and totally tasted like how you would imagine mallowmelt to taste like!:)
Now I am going to show you what the swag was!:)-- 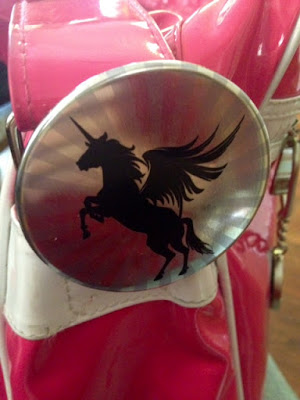 A Silveny pin that I have now pinned onto my purse so all can see that I am a Keeper!:D 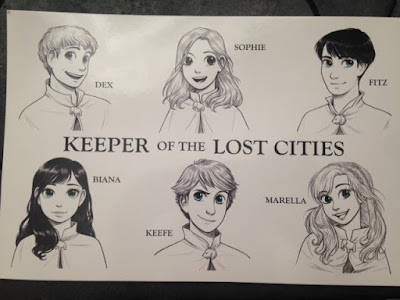 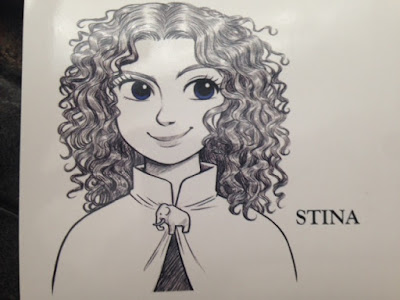 On the other side they show the new characters that are in the book, and I thought that if someone is excited to read the book, they wouldn't want to know what they looked like.:) But I will show you all what characters have already shown up.:) This is Stina! I love this picture because it helped me picture her in my head, I couldn't do it very well before.:) 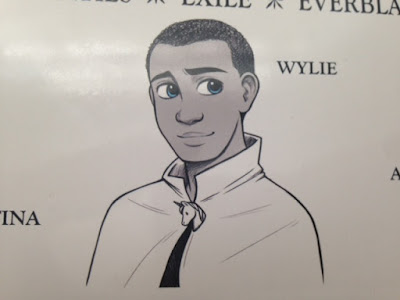 Wylie! I love this drawing of him, he looks so cool!:D 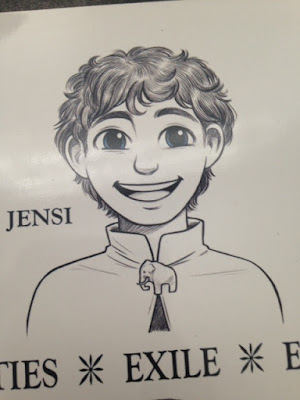 Aw, little Jensi! He's so cute, but not exactly how I imagined him, but close.:) 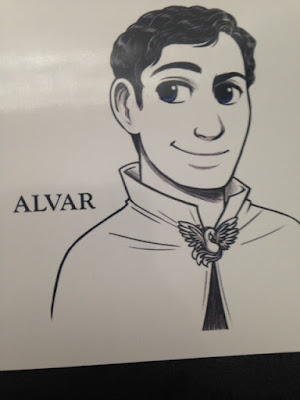 Alvar! Not how I imagined him again, but sort of similar.:) 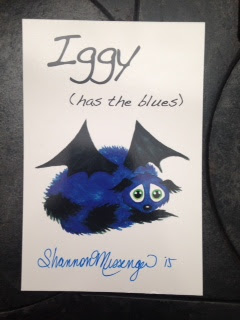 An Iggy Has The Blues poster drawn by Shannon Messenger! AH! He's so adorable!:D:D 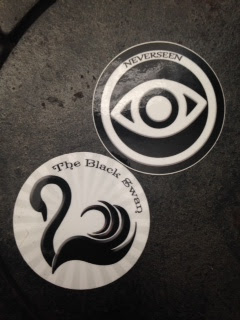 And last but not least, two patches! One for Neverseen and one for The Black Swan!:D
***
I had so much fun at the party and I am in love with the book despite how much I hate it at the same time.XD
I hope you liked this post!:D
-Emma-
Have you ever gone to a book signing?:) 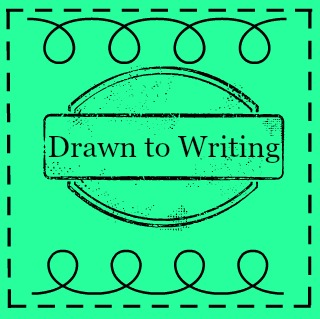 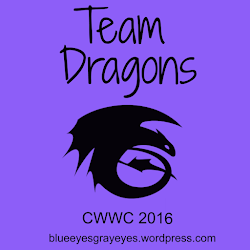 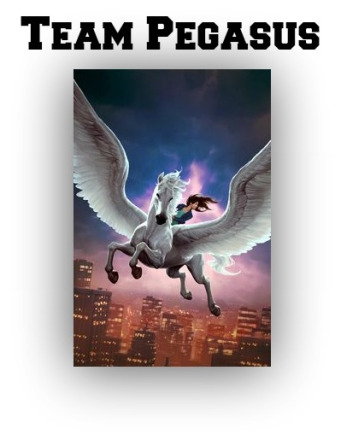 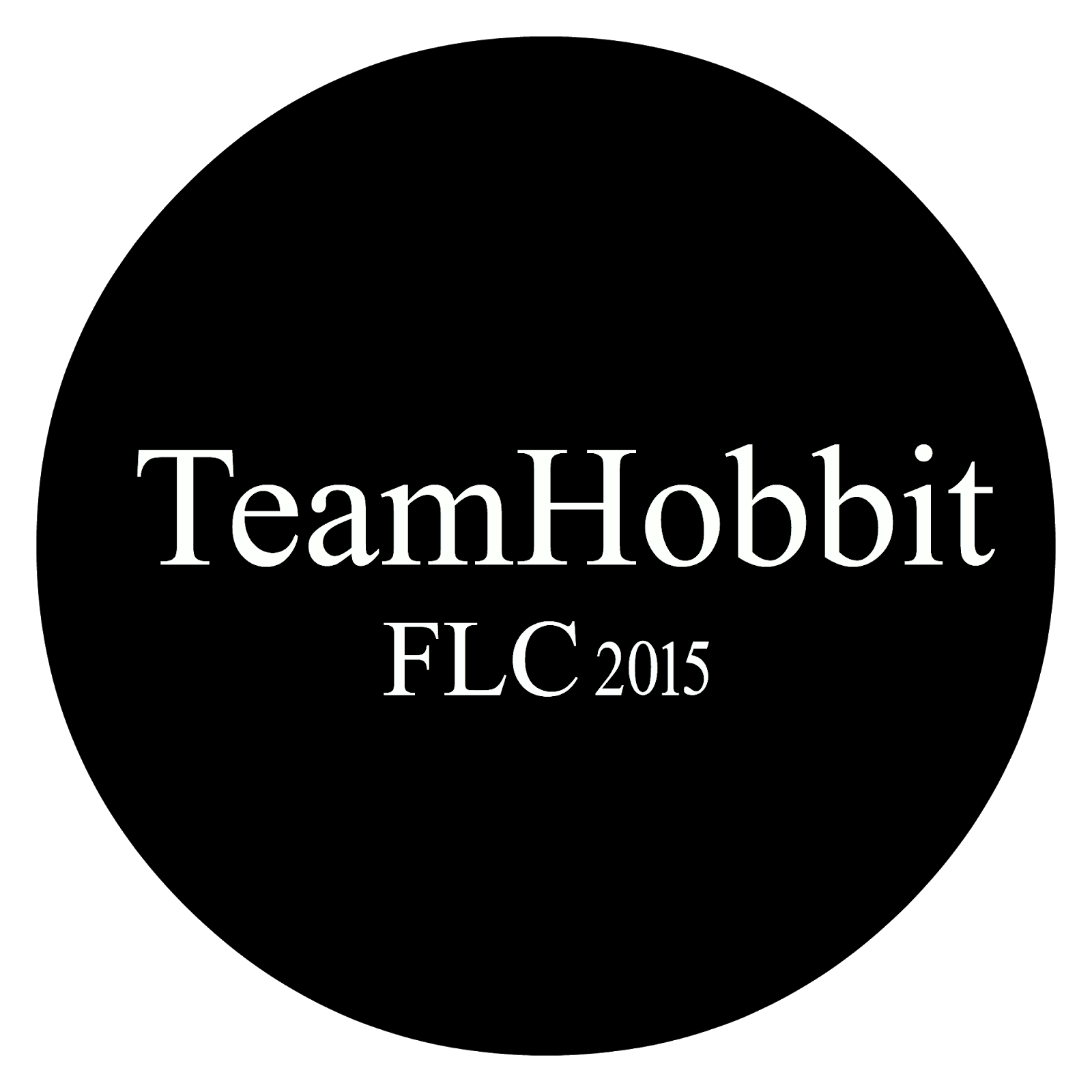 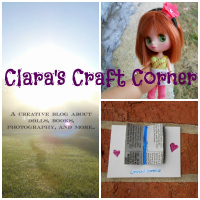 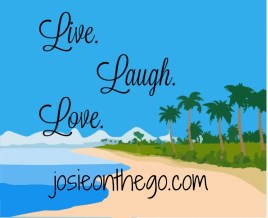 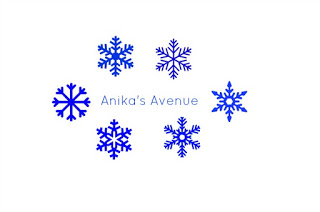 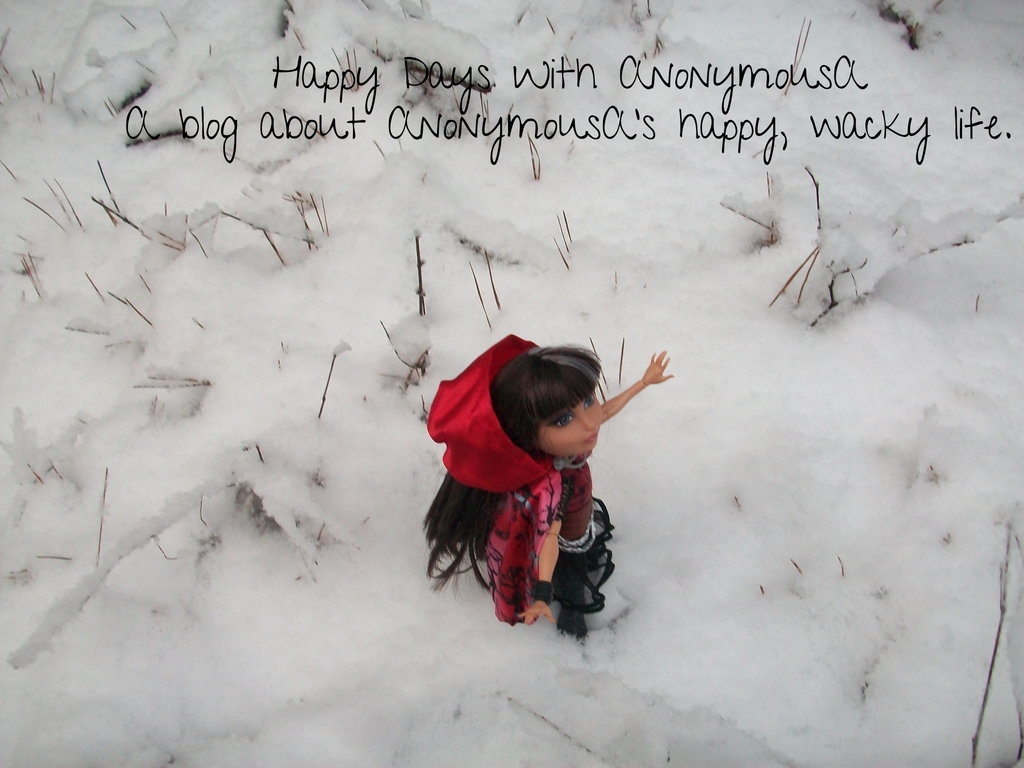 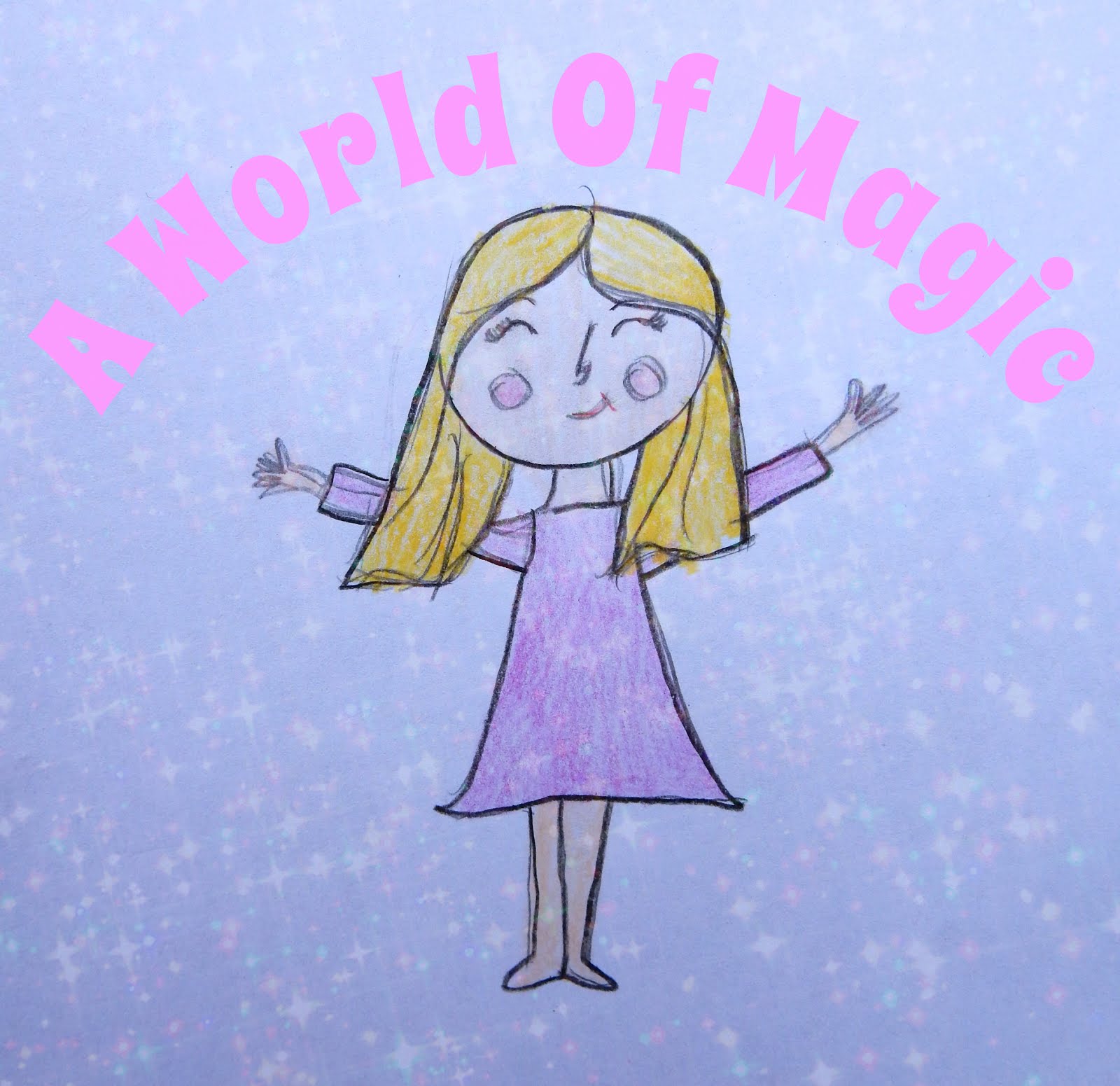 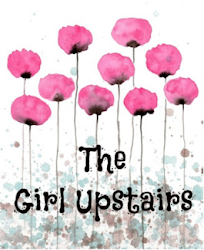